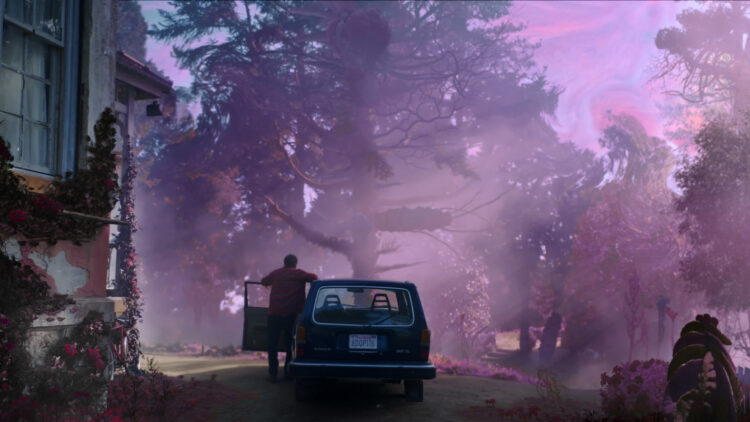 The colour from out of space

Hardly an avid fan of Lovecraft, but close to all my delvings into his writing have amazed me, for his voice was unique. His prose rich, dark and ever breathing life or seemingly shedding brief light upon the cruel and unknown to modern man vast depths of the universe moving in not solely the lofty idealism of some mega amplification of love and peace and marvel, but the magical evil that may well lurk both well within our primeval depths and beyond our current scope of awareness of existence.

How to bring such a theme to life in film? Concepts which make no sense, scream of a horror as old as the universe itself?? Its tricky, and cannot be done as perfectly as Lovecraft wrote.

I see some reviews wailing that the film did not meet basic narrative mechanisms. Some stating the descent towards the unhinged and chaotic descent into madness and misery was too swift, too predictable. And so what eh?

The film moved me uneasily in those primeval realms barely touched upon by the modern life. An evil coming to Earth as a colour, manifesting its magic in the form of wild flowers, bountiful blossom, bending of time, then seeking to alter and infect or absorb all life it can touch, with such fantastic colours more suited for disney epic of rainbow conjuring from a benevolent sorcerer than a hideous, ancient alien evil carried to Earth on a meteorite.

I believe Guillermo Del Toro has a screenplay of another superb Lovecraft novel, Mountains of Madness, which he plans to rewrite and produce in the coming years. I hope so, as more of Lovecraft’s work should be brought to the public eye. Ideally his short story collections…a very peculiar, never repeated avenue into horror, which instantly and has always inspired deeper impact on my mind, fears, heart than any other author of that realm I have read. It creates marvel but one of shuddering nerves, a fear long forgotten but still larval somewhere in the deepest recesses of our collective history.

There is no moral, no set form followed, nor do any of the human characters project redeeming or even particularly interesting qualities…but that is not the point of the film, nor was it the point of the short story it is based upon. This is but one chapter of hundreds Lovecraft wrote reflecting his dark vision into what really may be out there, with humanity contrasted in relation to this as a side note, at best an observer or prop to be used to illustrate our smallness and the magnitudes of power and wierdnness he saw and felt was deeply imbued into the most ancient of everything…