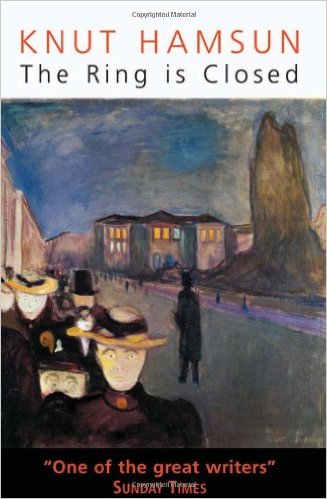 The Ring is Closed – Knut Hamsun

It is important to consider that Hamsun wrote this book towards the end of a life well lived yet one which was perhaps tended towards apathy, questioning the value of anything, as he felt his grasp of existence seeping away, day by day. Whilst there are clear parallels with running themes of his earlier novels; the class-addled notions of superiority of the rich, and certainly echoes of the narrow minded small town mentality found in so much of his writing, the general antipathy towards modernisation is absent as is a heavy contrast with the same against man living as one with nature.

The focus of the narrative which drifts over a lifetime of many of the characters, is majorly the son of a lighthouse keeper, Abel. A man whose proclivities and blunt yet gentle wisdom evoke both Holden Caulfield and Meursault, yet whilst indifference governs his plight, his heart beats and feels. With scant regard for chasing what others consider the steady, righteous path towards making the most of himself, of becoming something greater than what he appears to be, he sporadically exhibits not just the eagerness to enrich the lives of others, but accompanying, if brief, bouts of happiness.

His story steadily verges on sadness, though with maturity comes an appreciation of holding close to him less and less in order to simply be, to continue, to seek one meal and a lick of sunshine a day for sustenance. He simply lacks interest in collecting friends, money or the generally accepted idea of success.

It is towards the end of the novel where he sheds light on the cause of his very real apathy, when finally finding the words and occasion to bear hints of his deep rooted devotion to a woman he could never have alongside dark revelations of his misadventures in Kentucky. There is little intimation of his wounds digging so deep that the rest of his life was spent in shock, dulled to his own fate, yet its a reasonable assumption to glean.

Far from inspiring, Ring is Closed is a carefully considered addition to Hamsun’s lengthy library of analysing the human condition.