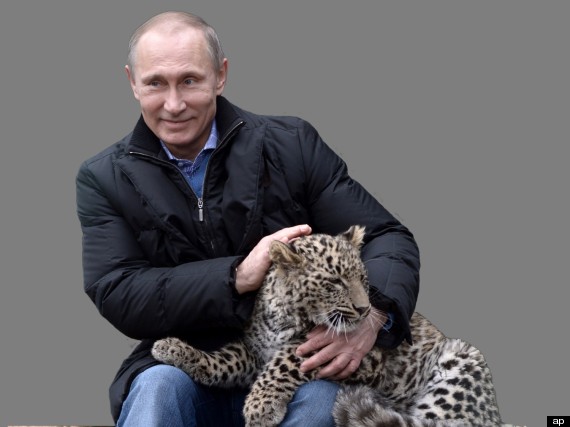 My dear comrade Vladamir Putin was interviewed yesterday by french reporters on the eve of his likely colourful collision with his Western pals at an event to commemorate the Normany landings. He was asked a number of questions, to which he gave typically candid, yet generally diplomatic responses.

Such was the length and breadth of the interview, it offers a chance to know more of the man than our Western propaganda machines would have us believe.

‘It’s better not to argue with women. But Ms Clinton has never been too graceful in her statements. Still, we always met afterwards and had cordial conversations at various international events. I think even in this case we could reach an agreement. When people push boundaries too far, it’s not because they are strong but because they are weak. But maybe weakness is not the worst quality for a woman.‘

‘Russian troops were in Crimea under the international treaty on the deployment of the Russian military base. It’s true that Russian troops helped Crimeans hold a referendum on their (a) independence and (b) desire to join the Russian Federation. No one can prevent these people from exercising a right that is stipulated in Article 1 of the UN Charter, the right of nations to self-determination.

In accordance with the expression of the will of people who live there, Crimea is part of the Russian Federation and its constituent entity.

I want everyone to understand this clearly. We conducted an exclusively diplomatic and peaceful dialogue – I want to stress this – with our partners in Europe and the United States. In response to our attempts to hold such a dialogue and to negotiate an acceptable solution, they supported the anti-constitutional state coup in Ukraine, and following that we could not be sure that Ukraine would not become part of the North Atlantic military bloc. In that situation, we could not allow a historical part of the Russian territory with a predominantly ethnic Russian population to be incorporated into an international military alliance, especially because Crimeans wanted to be part of Russia. I am sorry, but we couldn’t act differently.’

On the ‘proof’ which Obama and his cronies speak of, which confirms russian military meddling in Ukraine…

‘Proof? Why don’t they show it? The entire world remembers the US Secretary of State demonstrating the evidence of Iraq’s weapons of mass destruction, waving around some test tube with washing powder in the UN Security Council. Eventually, the US troops invaded Iraq, Saddam Hussein was hanged and later it turned out there had never been any weapons of mass destruction in Iraq. You know, it’s one thing to say things and another to actually have evidence. I will tell you again:  no Russian troops…

There are basically no Russian troops abroad while US troops are everywhere. There are US military bases everywhere around the world and they are always involved in the fates of other countries even though they are thousands of kilometres away from US borders. So it is ironic that our US partners accuse us of breaching some of these rules.

Regarding the defence budget. I’d like to say, for reference’ sake, because only the analysts know this, that the defence budget of the United States, which we talked about only yesterday, is larger than the combined military budgets of every country in the world – every country – combined. So who’s pursuing an aggressive policy?’

‘You know, I’m an adult and I know what power means in the modern world. In the modern world, power is mainly defined by such factors as the economy, defence and cultural influence. I believe that in terms of defence, Russia is without any doubt one of the leaders because we are a nuclear power and our nuclear weapons are perhaps the best in the world.

With regard to cultural influence, we are proud of the Russian culture – literature, the arts and so on.

As for the economy, we are aware that we still have a lot to do before we reach the top. Although lately, we have made major strides forward and are now the fifth largest economy in the world. It is a success but we can do more.’

Not for the first time, Vlad came across as an intelligent, well measured statesmen. Avoiding the constantly inflammatory language adopted by the Americans and British, aiming for diplomacy in all areas, presenting cold hard facts about the true nature of Western Foreign Policy and re-iterating his desire for Peace and Prosperity.

A brusque tone was employed on occasion, yet he seemed sincere and reluctant to add fuel to any fires which are clearly not of his making. He was stern on matters such as the obvious lies and agenda of the Obamistan Administration.

His character is straight, determined, unflappable. His responses are not carefully designed for soundbites. And there is no need for a teleprompter. In short, he exhibits many of the traits so sorely lacking in his polar opposite in the West. Whereas Obama consistently reinforces his reputation as a slick hype man perpetrating the most widespread mass deceit in recorded history, playing to the crowd at every opportunity, Putin plays to no crowd, nor shows any interest in affectation.

The irony of Obama attending the commemoration of a move which helped defeat the Nazis, whilst he continues to support an unconstitutional armed takeover of the Ukranian government and subsequent deployment of Nazi loving psychopaths to bomb, burn, shoot, maim and club to death innocent civilians is at best disturbing, at worst, an extremely worrisome sign of truly evil times.

The beast is upon us, and he lives in the Shite House…

For the full interview peek here>>>