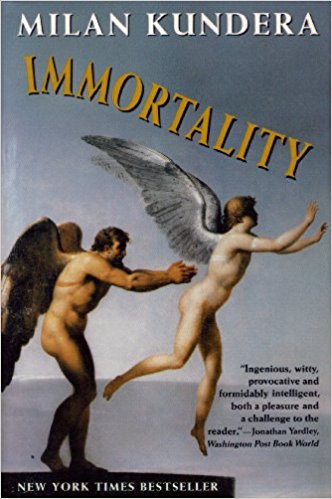 A persian friend with moons for eyes mentioned the author’s name to me a while back…knowing I write and read prolifically, and eager to suggest someone I might like and find within his work inspiration. A noble, kind gesture… I didn’t seek out the wordsmith, waited instead for him to come to me. As he did…found in a box my beloved hellhound was sniffing out after initially assuming an ENEMY, out front a neighbour’s house.

The framework of the novel is curious. The interspersing of focus of Goethe, of a story Kundera was writing, and of Kundera himself seeping into the narrative was odd yet well managed. The writing is intelligent, measured, educational and moves at a pleasant pace…yet…the tome lacks any pulse. It feels like its written from the Goethe and Hemingway realm, a realm after Death, looking back upon life impassively.

Many themes explored and considered are interesting, yet always drenched in an apathy bordering on nihilism. And as a man who thrives on passion, on instinct, on feeling, on romance, on seeking oneness with the wilderness within and without, the journey through the many, admittedly well connected pages, felt depressing…

Which isn’t to suggest the book is not readable. It is. Moreover, I am suggesting that if you are a creature who revels in the thunder and lightning, who understands that Feeling Means Everything, and to ponder the afterlife in any meaningful way is a waste of Life, choose to deal with it later…if you thrive on appreciating the magic of life, the intensity, and look upon the full moon standing naked in the garden with a glass of rum in hand and salute a Power you can never define but adore and bow to in reverence…then avoid this book. For its anathema to the passionate, to the fanatics, to the true lunatics who refuse to focus on the End and instead focus on the Now, those precious few who seek no words of any Man to guide them through the darkness, roar and rage at any and all doctrine, for guidance, they look to the stars above in a clear night sky and the moon…and the tides of the ocean.

I did not enjoy how my mind made sense of Everything expressed, exposed. My heart and instincts were roaring with disapproval throughout and I have finally ended the thing, and tried my third Gore Vidal book, found its not what I need, and turned back the clock to Hunter S Thompson’s Generation of Swine, which I ranked fairly lowly in regards to his other outings, at the time, a different time, my mid 20s when life was more a welcome vortex of beautiful chaos…And in the first fistful of pages, I have found more solidarity of spirit, and laughed wildly on the sand before snarling feeling Hunter course through my veins when accosted by a reject from ko phagnan beach hawker patrol and dealing with her playfully and sternly, mainly to make myself chuckle…

Writing to me, anything and everything to me, HAS to be about feeling and spirit. By which I am not referring to any doctrine of spirituality. That is not for me. I learn more of my spirit from riding through a storm when others are running for cover and feeling a need to be like the hail and blizzards, onwards, ever onwards…and as for Feeling…is it not truly, all that matters to everyone?

Essentially, Immortality lacks any appreciation of what matters most to me…SPirit and Feeling.

If you need to seek out the intelligent attempt at wisdom of an old man, then I would suggest you try Knut Hamsun instead. For despite his cynicism, which was concluded early in his life, mainly during his trips to the US, he never lost appreciation of both Nature and those amongst the human hordes whose hearts beat with the tides, Wind is the Passion in their Sails…This book is close to the death of Dreams.