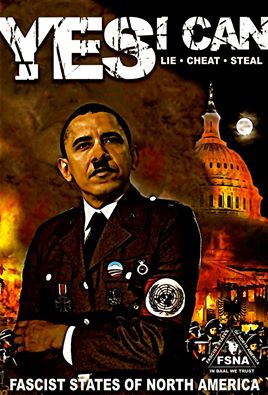 The Devil is Winning…

We see Israel supporting ISIS. We see Turkey’s huge oil trade, stolen oil from ISIS controlled regions in Syria. We see an ISIS commander explaining how he gets weapons from Turkey. We see Obama talking of training ISIS, We see an american senator who has been to Syria reporting that the US government are supporting ISIS. We see Israel, the US, the Saudis and Turkey arming ISIS. We see the zionist leader cozying up to the Saudis. We see our own ‘leaders’ talking of bombing ISIS for several years, yet ISIS territory expand by thrice. We see our own ‘leaders’ demanding a ceasefire when Russia begins bombing ISIS. What am I seeing that so few others do not?

The above reveals the reality of the ‘US led coalition’ against ISIS. Hundreds if not thousands of shiny new trucks, carrying ISIS cadres into SYria, with shiny new weapons…in plain daylight, on wide open desert, during the ‘coalition campaign against ISIS’. Is anyone seeing this? 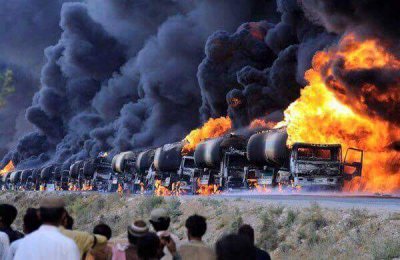 The Russian version of bombing ISIS…Note any difference?

I suggest Senator Black as a first eye witness of Syria…

‘we support people who hang children and burn them alive after the children have had to watch their mothers die and be slaughtered by these people…WHATS HAPPENED TO US????????’

I have barely fragments of the way the world works. I study the past. I study the now. And I turn to those who have been doing the same, have been on the front lines, to not justify but to present, an accurate, a real, an intelligent and informed view of the world. For what the devil can I say about Syria, when I have never set foot in Damascus? And so, I turn to those who have experienced LIFE in the warzones we are all talking of, and study what I can, not just from western media, for that would be akin to a judge solely accepting the prosecution. No, I delve into the defence. I research what the other side are saying, and what their allies are saying.. And remain, through pondering as many sides of the story I can delve into, focused on Cui Bono? Who gains?

When I comment on the Guardian, of anything anti Israel, My comments are deleted so swiftly that it appears that there is a large amount of Guardian workers, who are paid to delete, not moderate, anything critical of the Zionists. Not the Jews; the Zionists. They are not one and the same.

I know less than many, of the front line crowd, yet the way I see the world is…We in the West are ruled by anglo zionist powers. Nobody in power can attack them with words, let alone weapons, yet we all in the West support billions of dollars, billions of our taxes, to continue the genocide of Palestinians, to supply ISIS, to heal wounded soldiers of ISIS, to threaten Russia, Iran and China. No politician of the West can say anything negative about Israel, about the genocide they have been perpetrating for many moons…yes yes,,,30 people of Israel have been killed by Hamas rockets in the last decade, yet thousands, many thousands, of men, women and children have been slaughtered by the IDF in the same period. And we in the West have defended them, armed them. Do we also defend Israeli support of ISIS? Do you? How much evidence do you need to accept that ISIS are our boys in black???

The fact, not conjecture, not hearsay, but reality, that any politician in the West can say anything critical of Zionism, and their career is ended…in France, in England, in the US…tells me enough of who is in power. Who rules our own idea of ‘leaders’.

I’ve no interest, only contempt, for those who eagerly raise their own flag as moral superiority. Who pay a few gold nuggets to have the common emblem of ‘revolution’ inked on their flesh, and assume such a move makes them a modern Che…fuck them, they are mainly frauds and vaudeville villains. I am keen on gathering with people who are prepared to do something, mean something, feel something…

Make what you will…of the outpouring of a man who places the innocent before all others.

We are the enemy of the world. Maybe you find it weird, odd, lunatic, to suggest that it is our own leaders in the WEST, who are the real criminals.

The above is clear. At least to me. yet to bring matters closer to home…our home is been attacked, but by who?? I suspect first and foremost our own governments. Not just due to logical analysis of our Now, but due to proven, beyond any contention, form for such domestic state sponsored terrorism.