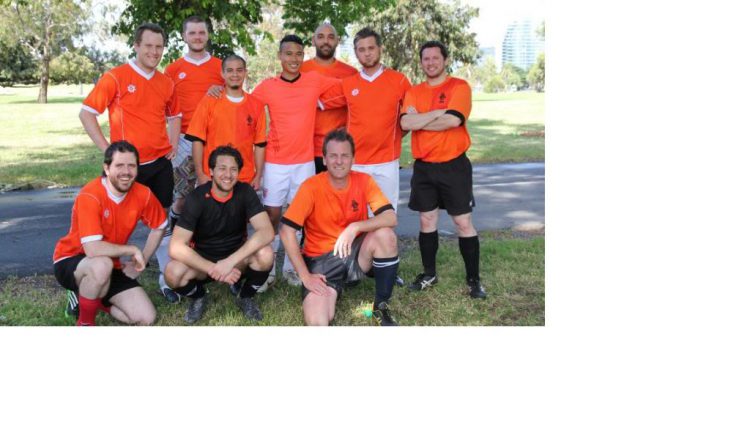 In driving rain, gale force winds and sporadic showers of cricket ball sized hail, the motley crew of CoM United (formerly and more righteously known as FaceCutters FC) gathered in a huddle with mere moments to spare before the kick-off of their first fixture of the tournament. Eyebrows were raised at the sight of Gideon S, who appeared unfashionably late, and much to widespread disdain, lacking his trademark Fellaini locks…Could he reproduce the scorching form of recent weeks without the curls?? Was Peter ‘Schmeichel’ Vlasiou fully recovered from injury?? Which Theo de la Pena would we see; the Jekyll or the Hyde, the greek Alonso or the aussie spite merchant?? Will OJ Simpson ever be brought to justice?? These questions and many others were running through the minds of the players as they tentatively took to the field, appearing hesitant, sodden with both rain and fear…or was it something else entirely??? Were the haphazard preparations merely a tactic in itself, and when the whistle blew, would they emerge from the traps like dogs of war hell-bent on not just beating, but terminating their opponents???

The action was soon under-way and all too quickly for our feckless foes, ANZ (one of 519 teams they entered), Facecutters FC found their rhythm. With 5 minutes on the clock, former vietcong sniper Daniel ‘Genghis’ Pennuto sniffed an opening and proceeded to charge up the left flank, his movements reminiscent to all present of the japanese bullet train…Big Theo ploughed a path to the right wing, spotted the gallant imp striding into the box and delivered an inch perfect ball across the face of goal…It was now a flat out race between Pennuto and the goalkeeper, and just as the behemoth launched himself for the ball, the nimble 34 year old rolled back the years, to strike past the gargantuan goon into the net…reeling around to deafening applause from not just our own fans but also the entire Albert Park region, such was the beauty of the goal. Pure poetry in motion…Not Ginsberg, more Bukowski.

Never renowned for his prowess in anything other than hacking, covering, face-cutting and racial slurs, it was as much of a surprise for the gritty wingback as it was for the opponents, who took the goal badly, it rotted their hearts, crushed their souls, destroyed all hope…Soon enough they found themselves 2 down, with the Lean by nature, Lean by vocation Peter ‘Thai Ronaldo’ Hiransi dummying the keeper and adding another nail in the ANZ coffin.

Try as they might, the traffic was now one-way. With the chilean, always industrious Jorge ‘Rocky Balboa’ Leon making it three in 10 minutes. Stealing in at the far post to finish off yet more pressure heaped on the miserable ANZ cackle by that man again Theo Blanas…who grabbed one for himself before the half-time cannon brought an end to our tomfoolery.

Cruising at 4-0, a flurry of substitutions were made with Gideon ‘Jeffrey Dahmer’ Scott taking to the field to lead the line, Burke ‘Brutal’ Stanton coming into the line-up to lock down the left flank and Daniel Costa buzzing around all over the final third eager to locate his momentum. Which would come…in time.

Theo De La Pena – The lynchpin of everything positive we achieved

The second half proved a less frantic affair, with Theo adding two to his account for the hatrick. One of the double was so powerful a shot that it took the head clean off a jack Russell that had the misfortune of finding himself in the wrong place at the wrong time! The owner took it on the chin, shrugging his shoulders and quipping…‘thats football’. Good chap! He even offered the carcass to Jorge as a gesture of goodwill. Who was swift to clean the meat from the bones with good cheer!

It finished 7-1. The one goal we conceded came from a series of bizarre ricochets, firstly off a low flying raven, then off the ref’s snout, and finally off post and bar to completely bamboozle Peter Schmeichel. They deserved their consolation, for they fought fairly and meekly. Just what was needed for our opening fixture…

The emphatic manner of victory gave rise to talk of reaching the final and taking home the trophy, but such confidence was soon tempered as we watched ANZ 134 vs ANZ 65. The standard of their play was slick, precise and very well orchestrated. They were fit, mean, fast and focused. Ever the optimist, Pennuto chirped ”well,as the saying goes, if you can’t beat em, kill em!’. Just to blow some wind of enthusiasm into the quickly sagging sails of the squad…Nobody laughed, or even smiled, but Gideon Scott, whose sly grin was followed by a whisper in the wind caught only by myself which was something along the lines of ‘Ive killed before and no doubt I will kill again...’. There was an odd zeal in his eyes, his hand seemed to be making a stabbing motion…

Gideon Dahmer – Following in the footsteps of his late Uncle

Fixture two saw the lads line up against Ernst and Young. The opening exchanges were cagey, with neither side forging any meaningful chances, the defences on song, the midfielders crossing swords to leave the game evenly balanced. Clearly, it was going to take something special, or strange, to break the deadlock. Michael Gibbon was mammoth in defence, throwing himself into the challenge like a Berserker, then moving out of our rearguard with the ball at his feet in a style not seen since Franz Beckenbauer locked up his titanium boots and branding irons…Daniel C was growing in confidence, Jorge Leon full of running. Gideon gaining pace yet still rusty…With the clock closing in on the interval, the player fast earning the title of Bandiera, Theo De la Pena, won the ball in midfield, and without looking up, threaded through a perfect pass to the galloping Gideon, who burst onto the ball, and with a deft poke of the toe, sent the sphere of heaven into the net and the crowd into raptures…

The second half proved equally gritty, with neither side dominating, both defences holding out. Richard Galloway was a rock at the back. Peter Hiransi a live-wire in the middle, linking up the play beautifully, his quick feet dazzling the opponents. Between the sticks, Vlasiou was supreme, collecting several powerful shots and distributing the ball with intelligence and panache, taking the numbers of female spectators as often as goal-kicks…We were all thankful for the final whistle and with it a second victory on the trot. The Gods had been smiling upon us. One more success and we would make it through to the knock-out phase.

Standing in our way was a gruesome looking collection of thugs known as Credit Union Australia. With little time to prepare, the plucky FaceCutters FC legion were thrust back into the fray…

After a lengthy rest, Pennuto was back in the mix, with Bourke S balancing the phalanx on the opposite flank. From the Off it was clear that this was destined to be a more gruesome affair all round, with tackles flying in from all angles. Gouges, garrotting, headlocks all fine and dandy for the black referee who reminded me of eddie murphy…With ten minutes on the clock, one of our substitutions went badly wrong, leaving a gaping hole on the left side of defence, which the credit union ghouls capitalised upon, finding their front-man one on one with Peter Vlasiou, who took desperate measures and kicked the fucker in the neck…bedlam ensued, with peter leaving the striker still and potentially dead on the turf, waving away the protests. Eddie Murphy was surrounded by CUA, who were desperate for a RED card to be shown. Eddie was having none of it, and laughed in the faces of pure evil, produced a pointless yellow and awarded the penalty. The CUA poltroons positioned the ball 1 yard from goal, which Pennuto and Blanas took major exception towards, resulting in the ball moving back several yards. Vlasiou stood firm, a low growl could be heard escaping from in between his gritted fangs, the kind of growl a dog makes when he aims to bite off your face…the penalty was missed, woefully. And soon after, we went straight up the other end, and Daniel C scored a blinder!!! Top corner, keeper had no chance…Even Lev Yashin would have struggled.

Michael Gibbon – A promising afternoon ended with his demise

Soon after battle resumed, Michael Gibbon was demolished, by the vicious Polak, suitably named POJBAEASK…Off he hobbled, to be replaced, by ace hack-smith, Pennuto. With Richard Galloway mopping up at the back, Pennuto covering every runner, we became a classic counter attacking squadron of Hades. A foul on Costa in the area led to Theo blasting our second, taking off yet another dog’s head in the process…and this time, the dog owner, joined us in celebration, before chasing the still rolling dalmation head, before it entered the lake and was devoured by the killer ducks…With the game now seemingly won, the CUA contingent resorted to niggling fouls, yet earned another penalty, when Blanas, completely understandably, kicked their striker 10 feet into the air, then brought his studs down on his horrid face…Much discussion ensued, as the player rolled around in feigned agony. And as a fat old man ran up to despatch the spotkick, Blanas could be heard by everyone, roaring ‘ YOU ARE GOING TO SLIP, THEN I WILL EAT YOUR LIVER’. Eddie Murphy saw nothing amiss, and the fat-man promptly spooned his last chance for salvation.

Goblin of the year, Daniel C

Costa was proving a constant thorn in their soft underbelly. Blanas and Hiransi were dictating the play from midfield, and every offensive manoeuvre was cut short by Galloway and Pennuto. Stanton offered a steady outlet on the flank, Scott made an appearance and almost added another. Before the game petered out into nonsense, Peter Hiransi grabbed a third, beating 5 players before slotting the ball into the net for 3-0.

The handshakes at the final whistle were insincere. The Polak was nursing a sore toe which I stamped on, and rightly so! And we were THROUGH THROUGH THROUGH, to the knock-out stage.

As a squad, we performed admirably. Yes, we relied upon Theo, but he also relied upon us. Special mentions are not needed, for the team as a whole can head home proud and haggard, to bask in the glory of what they have already achieved. Anything more will be a mere bonus…for FaceFuckers United have proven themselves, more than a match for any team…or dog.