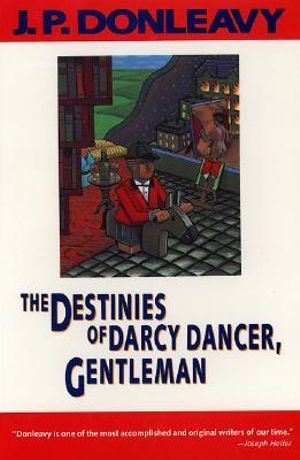 A few years ago I read The Ginger Man, by the same author, and i loved it…Since then, i have purchased The Beastly Beautitudes of Balthazar B, or a similar title, by Donleavy…but I never attempted to dive properly into it, and have since lost that book. So, with nothing left to devour of my in house library, other than War And Peace, The Devils and the final third of Gullivers travels, I grabbed Darcy, and threw all my eggs into his basket…i was far from unsatisfied.Donleavy writes mainly of ireland. Perhaps exclusively…This narrative focuses on a young lad born into gentry folk, and his adventures as he matures from tadpole into frog…the language is often florid, often lusty, but as the reader follows the young Kildare through the thighs of eager women, horse stables, hunts, stately homes of excessive grandeur, the characters are all delineated beautifully…I laughed often and heartily, as death, love, infatuation, religion, the very roots of such a life depicted, were all gorgeously rendered, and with them, through both thick and thin, a steady undertone of joviality.Well worth a read…7/10