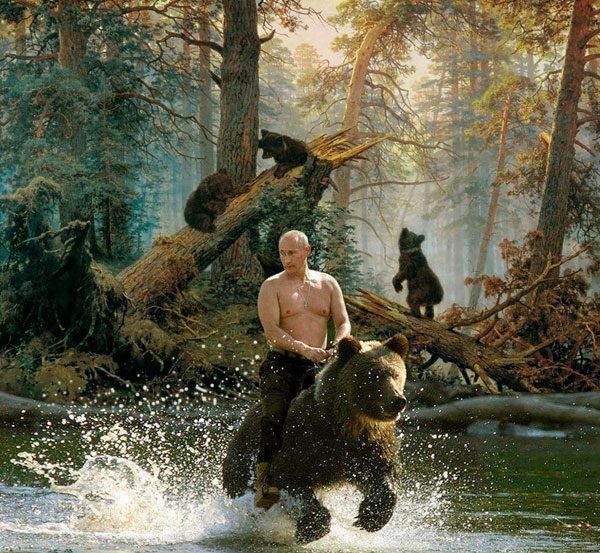 Given the sabre-rattling, side-stepping of the real issues performed by the hypeman for Death Inc, Obama, his british lapdog Cameron and the joke of a ‘president’ Hollande, rarely registers anything but disgust…and indignation roared towards the scriptwriters of such pathetic cartoons and horrific paranoia, it is refreshing to lock myself into Vlad and feel as if I am listening to and observing a man who is, for good or ill, telling the truth as he knows it.

There is no showbiz, no perfect white teeth bared for the cameras, no affectation carefully rehearsed to augment soundbites and catchphrases which the propaganda office has suggested and outlined. There is no blame-game, no threats, no warmongering. In short, there is no bullshit.

Which isn’t to say that dear Vlad lacks humour or mischief, yet his ‘comedy’ is clearly of no design or intent other than to make himself chuckle. Not endear himself to the mindless masses. The closest he came to showing mirth was to answer a loaded question with a russian proverb involving a grandma possessing a cock!

Which reminds me of how he greeted the former Israeli zionist pigfucker, Olmert, whilst Israeli President Katsav was been investigated for rape…

As Israeli Prime Minister Ehud Olmert met with the Russian leader in an ornate reception room in the Kremlin on Wednesday, reporters overheard Putin tell him: “Say hello to your president. He really surprised us.”

The microphones were then cut off, but a member of the Israeli delegation told The Associated Press that Putin went on to say of Katsav: “I met him. He didn’t look like a guy who could be with 10 women.”

The Israeli ambassador quipped, “It seems like he’s envious of him,” and Olmert told his host: “I wouldn’t envy him,” said the official, who spoke on condition of anonymity because he was not authorized to speak with the press.

Russia’s Kommersant daily conveyed a more graphic version of the conversation, quoting Putin as saying: “He turns out to be a really powerful guy! He raped 10 women!” It also quoted Putin himself as saying “We all envy him.”

Whilst wannabe do-gooders and feminist nuisance would jump on such a conversation, I found it far more an example of Putin acting sarcastically and affording us a glimpse of not a man who condones sexual abuse, but a puerile expression of mocking approval.

Still, as is and remains the case, ANY possible opportunity to delineate Putin as an autocratic nightmare for the world was pounced upon and demanded attention by the Western media. When the point should have been…Why has the Western world not been alerted to multiple charges of rape by the President of a country we arm and support in their genocidal slaughter of the palestinians.

It suits our agenda to label Vlad a rapist.

The other point to note of the exchange above is that it was intended to be private.

Katsav was convicted of two counts or rape, obstruction of justice and other charges in late 2010 and remains in jail.

Vlad explained that he had indeed held discussions with (US positioned and financed gimp) Ukranian President Poroshenko. He was open about the desire of Russia for a ceasefire in a war in which they are not party. Expressing acceptance that both sides were in violation of the Minsk peace treaty, yet adding that to obey to the letter such a thing, scores of those in the conflict zone would be forced to move their families and homes many miles away. Which is understandably problematic.

Families uprooted, shelling of innocents with US made munitions is small fry in such matters, for money and power are key. So let us focus on the nut of the matter…

Before the US and ‘international community’, which is basically the US and it’s vassal states, began funding, arming and politically supporting the widespread massacres and nazi resurgence in Ukraine, Russia had already loaned $3bn of gas to Ukraine. Since hostilities erupted and have been maintained with our own taxes, not to mention the $5bn US taxpayers alone have offered towards conjuring the conflict in the last decade, Russia have loaned another $7bn of gas to Ukraine.

The arrears stand at close to $10bn. If a customer owed a company $10bn, was refusing to pay, was offered huge discounts, as they have been, what kind of company would continue to offer essentially free supply?

Putin suggested that ‘partners’ of Ukraine, such as the US, UK, EU, IMF could help them reduce the debt. Which seems sensible and reasonable. Yet they only appear eager to offer weapons…

Something else the Russian Bear mentioned, briefly, was that $4bn worth of gas supplied to Ukraine has been oddly stockpiled, its supply to commercial and residential customers completely cut.

It appears to me that Vlad has the figures, the reality, plain for all to see, and for anyone to ponder that he is a new Hitler, on the basis of a western supported, illegal by international law, removal of the democratically elected government and subsequent bloodshed in Ukraine…had been watching too many cartoons.

I find this time and again with the Russians. This perception of sticking to cold, hard facts, without bothering with the showbiz.

The same routine was vibrant in the downing of MH17, slaughtering hundreds of civilians. Whilst Obama, Cameron, Samantha Power and that brain dead cretin McCain ranted about Russian responsibility, they provided zero proof to substantiate their incredibly serious accusations. Whereas the Russians gave a press conference involving their top military brass, grey and lifeless, no showbiz, no soundbites, no colour…yet for anyone who watched the thing, the general gist was as follows-

HARD proof of russian radar showing a ukranian military jet shadowing MH17 up until it was ‘downed’, lingering, then moving away.

HARD proof of no surface to air missile launch.

HARD proof of a US satellite, specifically designed to monitor missile launches, directly above the scene of the crime at the exact moment the crime occurred.

the now hard to find reports of investigators concluding the plane was shot down by a fighter jet.

The very sudden absence of the story from western mainstream media.

The complete absence of ANY validation of the accusations of proven liars, Obama, Cameron and their slaves.

Draw your own conclusions.

As always, ponder, Who Gained? I am pained to repeat this…but will, to add meat to the bones…The US and its partners in global terrorism have been banging their wardrums against the Kremlin. To bring about widespread support for WAR WAR WAR, the masses would need to be told ‘Look they did this, now we must get them!’. (They have also been banging their wardrums against Syrian President Assad, arming rebel groups fighting against him, who cut out hearts and show their efforts on youtube. And now, with the Saudis and Turks, they have created ISIS, whose immediate major battle, just happens to be…toppling Assad. How fortunate?)

And on the other side…what possible gain could there be for the separatists defending their very existence against US supported nazi hoardes?? It makes no sense whatsoever for them to bring down a civilian airliner. Yet how many millions believe they did, with the Russian Bear paw behind it all?

Did a separatist commander sit down with his strategists, and tell them…

‘The US and its comrades are itching for more war, they are supporting our enemies, I feel the best way forward is to blow up a civilian airliner and give them every reason they need to make everything worse for us…good idea?’

Only such dangerous morons could buy into such madness as those who believed that Assad invited UN chemical weapons inspectors into Damascus, then the very next day launched a macabre chemical attack on his own people, right nextdoor to the inspectors.

Generally speaking, of course, it is most often in your interests to avoid giving your enemies justification to amplify and gain wider support for their war with you.

What is the worst atrocity the US powermongers and their ukranian proxies could show the world in order to make them believe Russia and the separatists were evil and were responsible for all horrors in the region? Take down a civilian airliner.

What is the worst atrocity the same crowd could give to the world to gain support for ending Assad? Chemical attack on his own people after inviting UN chemical inspectors into Syria.

What is the worst atrocity now available to use to gain support for destroying Syria? Create a new ‘enemy’ and have them behead western aid workers whilst explaining their actions with a british accent allowing britain and other western nations to ‘clamp down’ domestically as well as pour more resources into a ‘war’ on ‘evil’.

(read here for further analysis from the time>>>

In other matters, Vlad spoke of his eagerness and interest in bringing about a truce between North and South Korea. Does this not seem anti-war? How often have you heard Obama or Cameron even allude to such a thing? For me, the answer is NEVER. Which is not to suggest Putin as humanitarian of the year, for there is money to be made, but nonetheless, where our leaders are throwing fuel on the fire of WAR, Putin appears to be far closer to the chinaman routine of…lets kill less and make more money?

Briefly I must mention LandShark of the Year Lavrov’s recent bout of apathetic bloodletting of the truth beast at the UN general assembly summit late September.

I admire this landshark of a man more than any other in the halls of global power. Since Chavez was put down. There remains, Lavrov. A beacon of truth in the darkness of deceit. He has his own agenda, of course, as all politicians and all people possess, yet he stands out, not just as the ferocious fusion between Man and Shark, but as a man in a position to demand answers of the real global terrorist…

“The U.S.-led Western alliance that portrays itself as a champion of democracy, rule of law and human rights within individual countries, acts from directly opposite positions in the international arena, rejecting the democratic principle of sovereign equality of states enshrined in the UN Charter and trying to decide for everyone what is good or evil.”

“Washington has openly declared its right to unilateral use of force anywhere to uphold its own interests.  Military interference has become a norm – even despite the dismal outcome of all power operations that the U.S. has carried out over the recent years.”

I can add no more to Lavrov’s extremely logical, factually based analysis. As bereft of charisma as he can appear, I strongly suggest you absorb his speech. He speaks what can no longer be called commonsense, for the most commonly found sense is to be spoon-fed bullshit, then ask for second helpings.