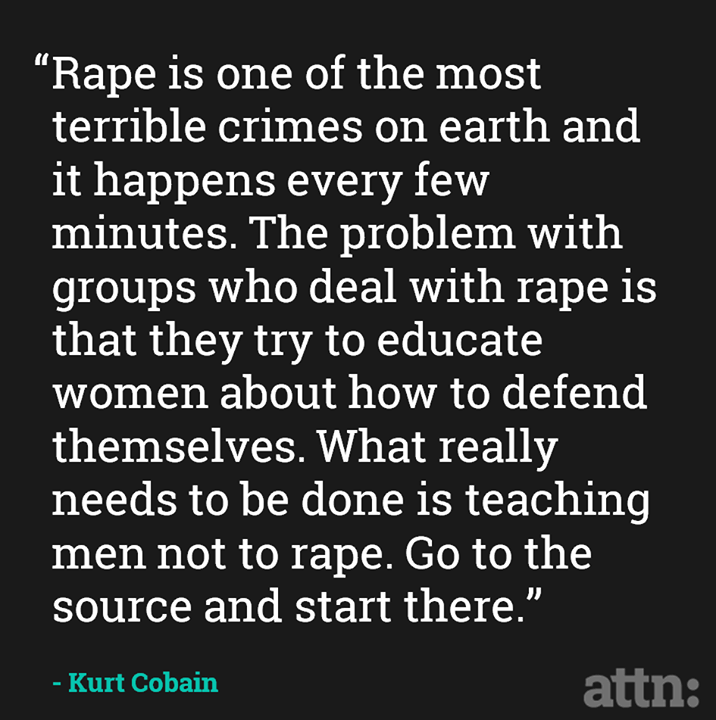 Can Rape be avoided by education???

A brilliantly sensitive poet of a man, yet perhaps not the wisest…

I have seen this caption doing the rounds on fuckbook, and every time it appears I am a little agitated. Not because I am a rapist, but because I find the message wrong and idealistic.

Undoubtedly there are cases where men (or women) are taught that rape is a fine way to behave. Some religions for example, countenance a despicable focus on treating women as chattel. And in the regions where such advice is enforced in a very strict manner, perhaps some can be taught that their religious leaders are wrong. That their God or Prophet is wrong. Not many I suspect.

One of the most powerful allies of the Western world in the Middle East is Saudi Arabia. Who are one of several countries who treat rape victims as criminals, throwing them in jail for the crime of ‘illicit sex’, regardless of the circumstances.

There are also families – I have met a handful – where relationships defy the standards expected of the majority in the western world. They scared me so deeply, that I refuse even now to offer any details. Suffice to express…There are certainly families in England and elsewhere, where the treatment of children and of women is sickening to the soul, almost too surreal to accept as a reality.

In the situations of such families and extreme religious interpretation of holy texts, I question the value of education. And also, how that education would manifest. Another ‘humanitarian intervention’? We have no form for invading countries to make the world a better place…So we would need to turn to probably the anarchists and those hellbent on apocalypse.

The majority of rapists outside of the countries where they, not their victims are protected by state law, probably know what they are doing is wrong in some sense. Else why would so many rapes occur in secluded areas, absence of witnesses other than the rapist and the victim?

Perhaps Cobain’s words were taken out of context. And he went on to say that his idea of education involves stronger deterrents?

We could make the punishment for rape castration, better still, turn them into eunuchs. Or simply kill them. Avoid making use of the organs for I have always believed that our instincts and other facets of humanity yet to be recorded biologically by science are not confined to the brain; they are in the blood, they are in the bones. So just to be safe, kill, then use the body as some form of fuel?

Such…final measures, however, should only be used when there is zero doubt on the conviction. Cut and Dried guilty. Which is trickier than at first glance. For as the laws, in England at least, have moved slowly towards encouraging rape victims to come forward and offering them privacy, protection of their identity during a profile, especially in high profile cases, there has also been an upsurge in entrapment and false accusations.

I often question whether a ‘victim’ of an alleged rape by a celebrity, let’s say a footballer of high profile and huge riches, would have brought the case to court were her assailant some Joe Blogs character. For two reasons. Firstly high profile targets of such claims represent perhaps a major coup for the authorities, for the publicity, for the perceived righteous bent of greater eagerness to put down those who believe they are above the law due to their privileged position in society. Secondly, the victim may well have the opportunity to make money.

However, in many cases there is no hint of financial enterprise, and its solely a brutal attack on the intimate liberty of another. And in these cases, I fail to see how education could make a preventative impact before the incident, absent of far harsher penalties, such as flaying.

It is as useful as suggesting that murderers murder due to a lack of education.

Rape is something obviously wrong. It is so regularly portrayed as wrong in modern society, that it beggars belief that more could have been done, in enough cases to warrant further investigation, to educate the perpetrator and dissuade the out-dated instincts are at play. Yet are they really that odd? Did not our male ancestors used to simply smash a woman over the head when he wanted her?

Education of such things should be inert for the modern man. As simple as treating others as you wish to be treated yourself. Yet that is not how our westernized cultures operate and show good example from the top. As a collection of countries, certainly the french, italian, german, english and in more modern times the United States (who have taken state sponsored terrorism to levels which I hope are never repeated by another country in the future), we have a history both past and present of committing horrific crimes against other nations, other peoples, other tribes. Mass slaughter, genocide, rape, torture all are common place in our foreign affairs.

With that in mind, and on record as fact, is it really any surprise that there remain in our cultures, a large number of rape incidents. And murder incidents. And other brutal and sickening complete neglect of the liberty of our victims.

I do not believe that an example needs to be shown to people, its enough for the horrendous treatment of other nations and their people, to be happening day in day out. For that sickness to trickle down to our own souls, regardless of whether we have seen the act. As a boy can grow to show the same tendencies as his father without spending any time with him, knowing nothing of him, apparently due to bad blood (yet I suspect more is at play), why not posit that the children of society, have in their souls and spirits, the remnants and ongoing examples of the horrific behaviour of our society as a whole in foreign climes?

I agree with Cobain that Rape education may have some value. Yet if a boy needs to be taught that rape is wrong, he is already likely too fucked up to change the very instincts which lead him to rape. I believe that there would be more value to showing young boys a ‘reshaped rapist’ made into a eunuch for his crimes, than any video, or seminar or other contemporary academic or social education mechanism.

Perhaps that was the education to which Cobain was referring??